This blog has been a little quiet for the last couple of months. Meanwhile, between us the PCT team are continuing to present and demonstrate the tool, and develop new features and prototypes, such as a schools layer.

This month, I spoke at a meeting of the Ealing Cycling Commission, showing some locally specific results. As in many local contexts, it was apparent that the current hotspots aren’t necessarily the places with the highest commuter cycling potential (although, if we take an ambitious view of cycling potential, the whole borough has lots of it).

Also this month, I organised a quick-fire workshop for the Lambeth Cyclists meeting. This wasn’t a PCT workshop. Fitting into one of the London Cycling Campaign’s monthly local meetings, the workshop aimed to get people thinking about which local corridors and neighbourhoods might best be prioritised for which modes. Where do we want the through motor traffic going? Where should be mainly for pedestrians? Where should the strategic cycling routes go? What about bus routes?

The PCT is useful for these kinds of events too, though. Often we have relatively little data available on cycle flows. While I was also able to generate maps of current cycling in the South Lambeth area using DfT count data, this only provides counts/estimates at particular points (not flows), and locations are limited (mostly on A roads). Moreover, it is of course only current cycling, it not being possible to count potential cyclists going past each morning. The PCT data can help provide an indication of both current and possible future cycling flows, complementing those current point counts. 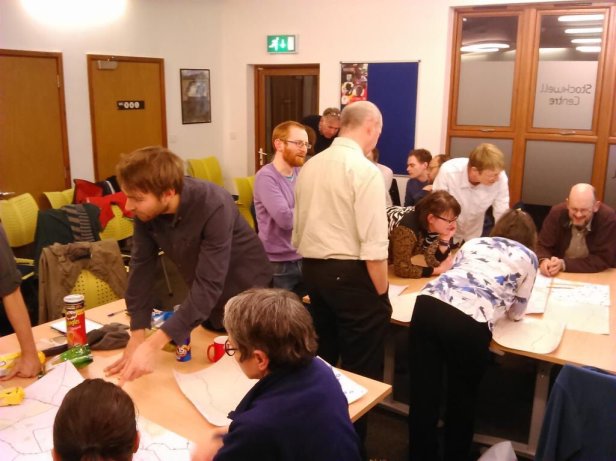 It’s getting the PCT into use – whether as the main event, or as generating data and ideas that can be helpful for other projects – that I’m particularly passionate about now. I’m leading a stakeholder training session next week (hopefully the first of many) where we’ll be covering both using the online interface and downloading data for calculation and visualisation, both of which can then be used for instance in business cases for cycle infrastructure investment.

I envision a growing PCT user community, where people utilise and contribute to the tool at different levels – from sharing case studies of how they’ve used the tool, to creating new tools, code, or apps that build on the PCT approach. Please contact me and the team at pct@pct.bike if you have news for us.