A hackathon was organised by Robin Lovelace and the rest of the PCT team to allow ‘advanced users’ to play around with the tool and come up with ideas for its future development. This follows the desire expressed by the team that the open source nature of the tool will increase its usefulness (Lovelace et al. 2017):

The PCT’s open source, freely available nature will, we believe, facilitate the future development of the PCT organically to meet the needs of its various users. To encourage others to use the outputs of the PCT project, we make the data underlying the online map available to download (via the Zones and Lines tabs in the tool’s online interface). We envision stakeholders in local government modifying scenarios for their own purposes, and that academics in relevant ﬁelds may add new features and develop new use cases of the PCT.

During the event participants learned about how the tool worked, building on a repository of reproducible code and data at https://github.com/npct/pct-demo

Attendees included representatives from academia, the public sector and transport planning consultancy Systra, who are using the the PCT to plan for a strategic cycling network in the North East.

There were some excellent ‘hacks’ done on the PCT as illustrated below:

BikeSafety demonstrated how now visualisation methods could enhance the ability of the PCT to be used to better understand road traffic collisions and make roads safer – as shown in the video below: 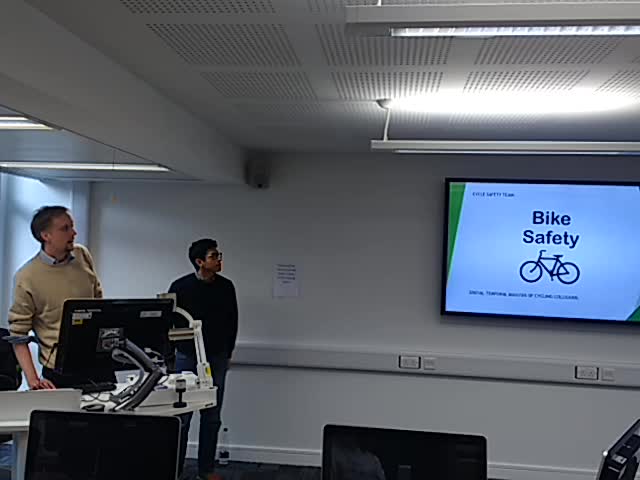 CyIPT (the Cycling Infrastructure Prioritisation Toolkit) is a pre-existing project that has built on the PCT. Malcolm Morgan from the PCT team demonstrated how overlaying infrastructure data on PCT values could help prioritise new infrastructure:

NewScenarios was a a demonstration of how the PCT can (relatively) easily be used to generate new scenarios. PCT member Anna Goodman and ITS staff Ian Philips presented new scenario generation based on data from you:

shortCarJourneys is an app to identify where short car journeys are taking in a city, potentially a vital evidence-base for local planners to help tackle car dependence. Robin Lovelace presented to tool and deployed a small publicly-accessible web application for testing the app:

The app can also be seen in action in the photo below:

Another hack that was not acted on was to make it easier for users to select all fastest routes passing through a specific point, as illustrated below:

As documented in the PCT Manual, this can currently be done using the Freeze Lines check-box, but this is not well-known or intuitive.

Overall it was a great event and shows there is high latent demand for training courses for the PCT, for practitioners and advanced users alike. More fundamentally it shows that if publicly funded transport models are commissioned to be open source, others can build on them, greatly increasing their value and reducing the ‘opportunity costs’ of creating new tech products.

I’d like to thank everyone who attended for a fantastic event which was not only productive but enjoyable, as illustrated in the final photo of this post: