We have now added a third scenario to our schools Layer: the Go Cambridge scenario. This shows the proportion of children who would cycle to school if local children acquired the same propensity to cycle as children currently living in the local authority of Cambridge, taking into account local trip distances and hilliness. It is therefore analogous to the Go Dutch sample, except using children living in Cambridge as opposed to children living in the Netherlands as the reference point. 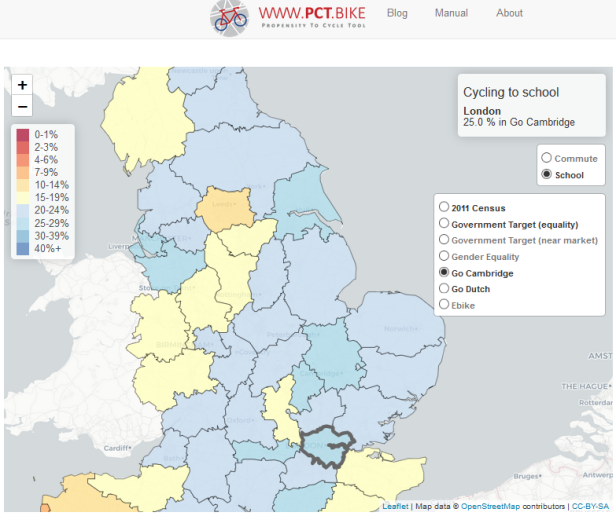 Note that in all PCT scenarios, we never decrease cycling on any particular origin-destination pair. Therefore, any OD pair that has levels of cycling above the average for a given scenario remains at its above-average level. (Nationally most such OD pairs are at above-average levels simply because they are small and so are more subject to random variation, for example an OD pair where just one person travels, but that person cyclist). For this reason, levels of cycling in the Go Cambridge scenario increases even in the local authority of Cambridge, from 30% in the NSC 2011 to 37% in the Go Cambridge scenario.

We do not plan to introduce a Go Cambridge scenario for the commuting layer. This is because current cycle commuting rates in Cambridge are fairly similar to those seen in the Netherlands, and so the Go Cambridge scenario would not be very different to the existing Go Dutch scenario. By contrast the two scenarios are distinct for school travel, because propensity to cycle to school in the Netherlands is higher than propensity to cycle to school in Cambridge.